A number of factors contributed to a late start on this project - the election situation which delayed the tender signing and the unprecedented fire situation tying up equipment  To make matters more complicated we have had an early start ( 3 weeks) to winter like weather. 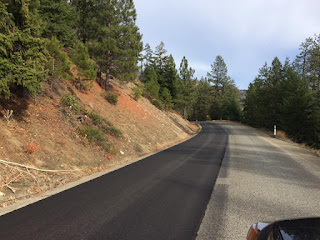 I spoke to MOTI officials today as a result of a variety of concerns on the paving so far.

The first layer is a level course layer and that is followed by a top lift layer.

The contractor is currently working hard to complete the 25 km section at our end - both layers and finishing touches and replacement of barriers etc - before winter hits.  If they do not succeed, they will need to basically put barriers back and come back in spring. 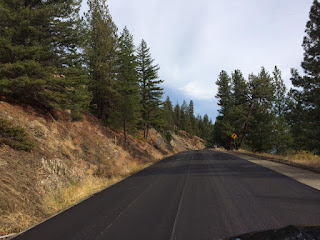 The 12 or so kms on the other side of Terzaghi Dam on Rd. 40 is next.  Same story as our end...if they have to take the winter break they will, but they will be back in the Spring.

The school parking lot is still on the list and will be paved out of the project funding - thank you MOTI!

The Ministry has a quality assurance program where they take cores of the new paving and they analyze - contractor can receive penalties or bonuses based on what that analysis shows.  Lets just hope they do a good job.

The No Firearms Discharge Bylaw encompasses areas around Tyaughton Lake, Gun Creek Rd., Gun Lake, Gold Bridge and Bralorne.  The link to the bylaw is below and scroll to the end to see the maps.

We have had some challenges siting the No Firearms Discharge signs in the Tyaughton Lake and Gun Creek Rd. corridors due to vandalism of other signs (cut off and removed) as well as MOTI rules around where these signs can go.  This has required other security steps be taken so as you as the taxpayer don't have to pay exorbitant amounts to replace signs which are stolen.    We are working on it though, it will get done eventually.

In the meantime you can, should you choose put in a complaint to Bylaw Enforcement.  Complete information is here:  https://www.slrd.bc.ca/services/bylaw-enforcement

If a party is hunting legally  within the boundaries of the No Firearms Discharge bylaw maps they are permitted to do so.  The trick is to understand what "hunting legally" means, this cheat sheet is based on Provincial legislation and regulations and I ran this by the Conservation Officer for our area for accuracy. 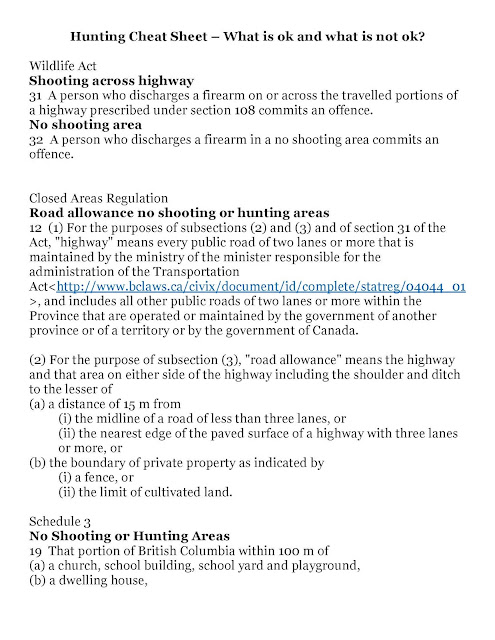 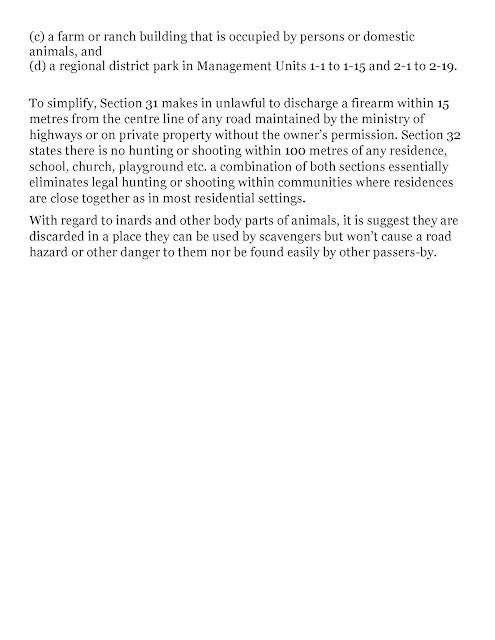 If you see a Hunting infraction it should be reported to:

And of course, you can report to both.  The trick is getting accurate and identifying information to report - smartphone cameras and so on are great tools in this regard.
Use of Emergency PEP Radio channel granted

As a result of several search and rescue type situations that demonstrated a lack of coordination and a lack of local knowledge I drew the first responders and our emergency management department together informally to brainstorm a list of actions that would improve the situation.  A number of very good ideas emerged.  Ryan Wainwright, the SLRD Emergency Program Manager sought and has been granted permission to use an EMBC PEP-COORD channel.  Darren Oike from the District of Lillooet coordinated with all first responder groups serving the BRV and Lillooet area around implementation – turns out District of Lillooet had been working on the same thing. It has now been used successfully on a number of occasions. EMBC has a protocol in place for use of their channel so it wasn’t necessary to develop one.

The SLRD Emergency Program Manager, Ryan Wainwright will be discussing use of the channel with Seton Fire Department and Gun Lake Fire Protection Society in the next short while.

This is a step in the right direction although a number of the other ideas brought up will also need to be actioned to make SAR’s and other types of rescues more effective in our area.
Posted by Debbie Demare at 10:49 AM