Mining in the Bridge River Valley

Mining Exploration: Amarc HDI - IKE property Update
Amarc HDI has operated for the last two years out of our area on their drilling/exploratory work on their IKE Property.

The claims are nestled between the South Chilcotin Mountain Park and the Tsylos Provincial Park.
The property is outside of the St'at'imc Territory and within the Tsilhoqt'in territory. Please see the article below re Tsilhqot'in views thus far.

Amarc will be undertaking a 6 week program again this year mobilizing in early July.

The crews will be staying in one and possibly more locations in the Bridge River Valley.  Helicopters will be involved again for transport and some further mapping activities.

They have hired at least one local person.

Amarc HDI donated $2,000 last year to the Bralorne Ball Diamond Fence project.  Diane Nicholson, their president will be attending the Ball Tournament and we also hope to have her involved in some other meetings while she is in the Valley.

The actual claim in outside of the Statimc Territory and within the Tsilhoqtin territory. Please see the article below re Tsilhqotin views thus far.

Here are some informational links that will provide background on the IKE project:

I have spoken to the principal of this company, Alex Slautin.  He is a Geologist. 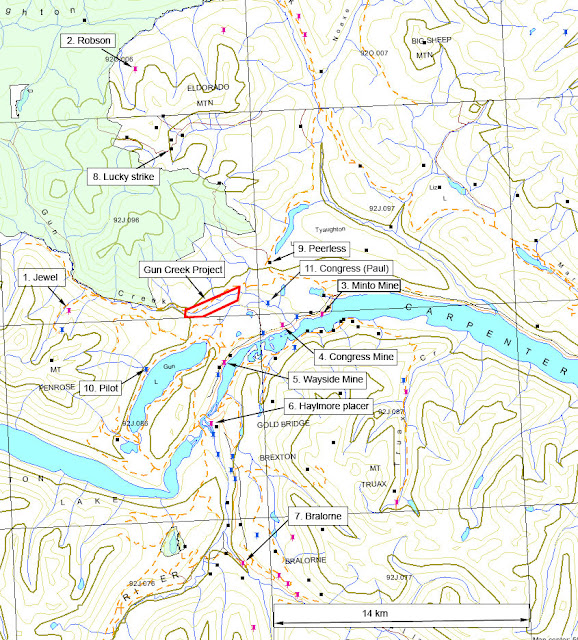 This placer mine has received Ministry of Mines approval to do some testing. They are at the proving the concept stage. They will know after they do testing etc what the potential is.
The Size/foot print  is under one hectare

Mr. Salutin estimates if this were to get going it would be a 2 man operation. He plans to do this himself.  They would mine 20 cm/hr, daily 150 cu. metres, total probably a couple of thousand cu.m.’s.

Mr. Salutin says that if this placer mines goes ahead the area must have topsoil removed and stockpiled, same with overburden.  They must have a tailings pond for the water to go into.
When they reclaim, it gets filled in with the topsoil on top and trees replanted. Under the supervision of the mine.

Mr. Salutin has been in contact with the St'at'imc and beleives they will be undertaking some cultural studies.  It is my understanding that this company must have the approval of the St'at'imc to proceed and has approached them re partnering and/or job opportunities.  I have requested information from the St'at'imc re this and where this proposed placer mine is in their "approval" process, have not heard anything back.

As you may or may not be aware, Bralorne Gold Mines is now owned by Avino Silver & Gold Mines.

I have spoken to the supervisor of the Bralorne project recently.   This update which I have included below is taken from their website:  http://www.avino.com/s/bralorne.asp.  This update matches closely with what the supervising engineer of the project has told me with the exception of the need for additional geotechnical work being required on the tailings dam and likely not completed until this coming fall.

"During the first quarter of 2016, Bralorne continued to prepare and evaluate a strategic mine plan, including an assessment of more cost effective mining methods and capital expenditures needed to bring the project to a profitable position. The Company has acquired new mining equipment including two new scoop trams and a rock breaker from Sandvik, and a loader from Caterpillar as well as a new medical facility and woman's dry. Further, the Company has ordered a new development jumbo from Sandvik and expects to take delivery in the coming months. This brand new equipment will help to reduce maintenance costs while increasing mining productivity and efficiency when the project resumes operations. Ongoing maintenance and improvements continued in 2015 and the Company has been reviewing the requirements to increase processing capacity should the resources and mine plan prove feasible and viable. A raise to the embankment dam for the tailings storage facility was completed in October 2015 and the Company is currently in the process of obtaining the permits to resume processing and mining activities from British Columbia's Ministry of Energy & Mines and Ministry of Environment.
In February 2016, Bralorne, in conjunction with North Island College, the government and First Nations completed a 4 month long underground mining fundamentals educational cohort for 12 students from St'at'imc First Nation communities around Lillooet. Following three months of classroom instruction, Bralorne provided support and access to the mine site for hands-on training. All 12 students graduated the program with a number of industry certification tickets which will help towards Bralorne's long-term goal of enhancing the local labour force. The Company is maintaining open lines of communication with First Nations communities, and management continues its efforts to build meaningful positive relationships with its stakeholders."