New Water Pump for Gold Bridge and other items: October 2012

$45,000 has been approved under the Regionally Significant Project (RSP) Fund have been approved for federal Gas Tax funding by the Gas Tax Management Committee, composed of representatives from the Union of BC Municipalities (UBCM), Infrastructure Canada, and the Ministry of Community, Sport and Cultural Development.

Canada's Gas Tax Fund provides stable, long-term funding to local governments to help them
build and revitalize public infrastructure. The UBCM administers the Gas Tax Fund in BC, in
collaboration with the governments of Canada and British Columbia.

The funding for Gold Bridge will allow a badly needed, larger pump to be installed so that residents will have an effective water system and will allow opportunity for growth in the system.


Will the Spruce Budworm be back next season???

The answer is yes, the big question is how severe will next years defoliation be?

Lorraine Maclauchlan,  Forest Entomologist, Thompson Okanagan Region gave us a presentation on the Spruce Budworm on September long weekend.  You can see information on that presentation on this blog at this link:  http://www.debbiedemare.com/2012/09/woodstore-exchange-and-other-items.html.

Lorraine promised information once they had done some egg mass sampling and here it is:

Lorraine says:   " To summarize briefly, there seems to still be a population present in the area and defoliation will continue in 2013 in many of the same and a few new areas.  Most sites came out as moderate with about equal number predicting light or severe defoliation for 2013.

As of now I still cannot say anything about our budget for 2013.  Therefore, whether or not MFLNRO will entertain a spray program in the area is still questionable.  I am going ahead with the assumption we will be spraying (arranging meetings with First Nations, submitting plans to MOE, delineating DRAFT spray blocks etc). "

Debbie's Note:  Please remember that any spraying done by MFLNRO would be on crown land.  I am interested in hearing your thoughts on this so please feel free to email me at demare87@gmail.com, also any questions you have, I will get Lorraine to answer and publish here.


The School Trustees of the Gold Trail School District met at the Gold Bridge school.
Two other important points came out of that meeting for me:
1. The school field is in terrible condition.  As a result of that meeting, I have committed $5,000 SLRD Area A funds to partner with a funding application to the School Connections Fund. This fund is primarily intended to link local government and school districts to work on projects that benefit both the public and students.  At this writing, I am uncertain if the School District has moved this application forward to the funder.  A local person has donated used of excavator and operator and also the Parent Advisory Committee has committed volunteer labor.  Fingers crossed!!!
2. Planning for the future of the school must be done by the community.  School District may partner but cannot initiate this.  With 4 students and challenges continuing around this aspect of our community, this is something we need to work on.  If you would like to be part of a small committee to work on this let me know.  Jim MacArthur (current School Trustee Lillooet) said to call him as well.  We will need to find funding and hire someone to help facilitate, involve community and come up with a plan.

Posted by Debbie Demare at 4:22 PM

The Union of British Columbia Municipalities (UBCM) is an organization that all the cities, regional districts and now some First Nation communities belong to.  Every year they have a week long convention and this year there were representatives there from every local government.  The convention is considered very important to attend. Why?

1  Ministerial Meetings.  This year I took part in 3 meetings.  Two with the Premier – one related to increasing our bandwidth coming into the Bridge River Valley and one related to Economic Development in Pine Beetle affected areas. Both of these meetings were very positive and I felt the message was understood. 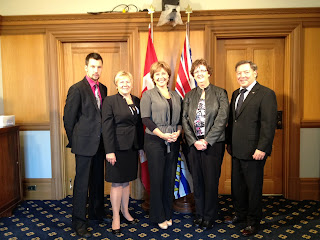 I also attended a meeting with the Minister of Transportation and Forests.  Unfortunately this meeting, 10 minutes long, had too many SLRD “road” topics on it including the Hurley and Hwy 40.  I am going to request a follow up meeting with the Assistant Deputy Ministers of both these ministries.  The Minister’s were very receptive, there just was not enough time for the “discussion” piece.  I did find out though in a meeting with the Premier, that Min. Ben Stewart (who looks after the high speed internet file) new about our area and the Hurley Road.  Bonus!  I caught up with him at a reception later and it turns out he has camped in our area and is well acquainted with the Hurley.

2. Workshops, Panels and Forums.  The first of these started at 7:30 AM!!  I attended workshops on:

Impact of grow ops on houses and the lack of a standard for remediation of these houses
Decriminalization of marijuana and the impact of organized crime in our communities (see a theme yet?)

This was an excellent panel workshop that presented skilled professionals in various fields with differing views on how to tackle the marijuana dilemna.  Some points I jotted down were:

Internet Voting in 2014:  Below are a couple of links to presentations from this workshop.  This may be a very good way for an area like Area A, SLRD to encourage non-resident property owners to vote for the Regional District Director.

Cabinet panel on jobs and the economy
BC Ideas (go see it at http://www.changemakers.com/bcideas)
BC Policing Plan (go see it at:  http://blog.gov.bc.ca/bcpolicingplan/2012/10/the-bc-policing-plan-at-ubcm/)
Municipal Finance

3. Resolutions.  When an issue is important to a local government they often pass a resolution and forward it on to UBCM.  It is then considered by the 1800 or so local government representatives that attend.  If it is passed then it becomes something that the UBCM Executive (Board made up of local government elected people) and Staff start following up and working on with other levels of government etc.  UBCM has an excellent and long standing reputation for moving various issues forward in a way that is very helpful to local governments.
The newsmaker resolution this year was:  Therefore be it resolved that UBCM call on the appropriate government to decriminalize marijuana and research the regulation and taxation of marijuana.  It passed by with about 70% vote.  In talking to other elected people it was felt the vote was mostly symbolic and a statement that the current regulations are not working.  Nearly 75% of the marijuana grown in BC is exported to the US and traded for cocaine and guns.  The organized crime related activity around this has escalated to significant levels in most communities in BC. Port Moody councillor Port Moody councillor Bob Elliott said his "quaint, safe city" has seen three gang-related murders in the past six months. He pleaded for support for decriminalization.  His words really swayed me although the arguments on both sides were excellent.  We have been pouring massive amounts of money into policing to try and control this and it isn’t working.  I added my voice to the majority calling for something different to happen.
Although this was the resolution that caused the most fuss, many other very practical and relevant resolutions covering a huge range of topics were endorsed. You can see all the resolutions and whether or not they were endosed at:

4. Receptions, Lunches and Dinners.  Every day there are sponsored lunches, dinners and receptions.  Each evening between one and four receptions.  I think I attended 13 in all!  These are excellent opportunities to make connections with other elected people, provincial and federal cabinet ministers and other lobbyists representing various industries and organizations.

So, can you imagine walking into a reception with 1500 people all talking?  It is noisy and intimidating.


I managed to move around and made a ton of good connections and had several key conversations.   Receptions were hosted by the Government of BC, the City of Victoria, Fortis BC, Epcor, B.C. Library Trustees, the Canadian Petroleum Producers, to name a few.   To access the CPP reception there was a gauntlet of protestors on the Northern Gateway Pipeline project.  The most novel food I ran across was mashed potatoes topped with curried chicken in a wine glass!!!

Let me tell you my bed was SO welcome after a day like these.

Both Adrian Dix, leader of the NDP and Premier Christy Clark gave major speeches.  Then, much to my shock, at the very end I won the Door Prize, a $5,000 gift certificate for a cruise sponsored by the Port of Vancouver.  The trick will be getting Sal on a boat!

Attending the UBCM convention can definitely net many benefits for our area.  Victoria was a beautiful place for it however I really didn’t see much except the Legislature, the Victoria Conference Centre and my bed in the EmpressJ  For my first UBCM convention as Area Director, I was pretty happy with how I did and will learn from this experience and next year really go for it!