The BC Wildfire Service recently issued an update to the Provincial Strategic Threat Analysis (PSTA), a collection of datasets that are used together to identify interface areas that may be at risk of wildfire.
Local governments, First Nations, natural resource management agencies and resource-based industries use the datasets to prioritize community wildfire protection planning, and to guide mitigation of wildfire in areas identified to be at risk. The mapping layers include vegetation types, historical wildfire data, forest fuel classification, fire behaviour patterns, geography and other factors.
The PSTA 2015 Wildfire Threat Analysis presents these relative wildfire threats at a provincial scale only. In an area where a high risk is indicated, a qualified professional should confirm the actual rating at the forest stand level.Click here for the: 2015 Wildfire Threat Analysis and associated maps . If you have a look at this map closely, you will see areas in the upper Bridge River Valley range from high to extreme and many of these are in interface zones with residential areas.
The PSTA informs the Strategic Wildfire Prevention Initiative (SWPI) and the government’s landscape fire management planning and fuel treatment programs. Fuel treatment is the process of modifying forest or rangeland fuels.
Since 2004, the SWPI has provided funding to local governments and First Nations for wildfire protection planning and fuel treatment. The SLRD has obtained funds to undertake a fuel mitigation project in and and around Gun Lake (see previous post)
While wildfire is a key process and component of ecosystems in British Columbia, the present wildfire situation in British Columbia presents challenges:

Terzaghi Dam Spill Notification
Thanks to BC Hydro for providing this information.  If you have been by on Rd. 40 downstream of Terzaghi Dam you will notice the release.   Please be careful, the river is now moving quite quickly and in one spot only metres below the road bed.   Note below on the chart that the release will almost double in volume in future periods and then gradually decrease again.

BC Hydro definition of a Spill Release condition:
- Occurs when water is released in a controlled manner from the reservoir ("spilled") through a dam's spillway or other outlets to reduce the rate of rise inflow and water level. In so doing, the flows along the Bridge River system are expected to change.
- Considered routine operations for BC Hydro to manage reservoir levels and not an emergency event for BC Hydro.
- No flooding is anticipated but rivers may be flowing up to the tops of banks. 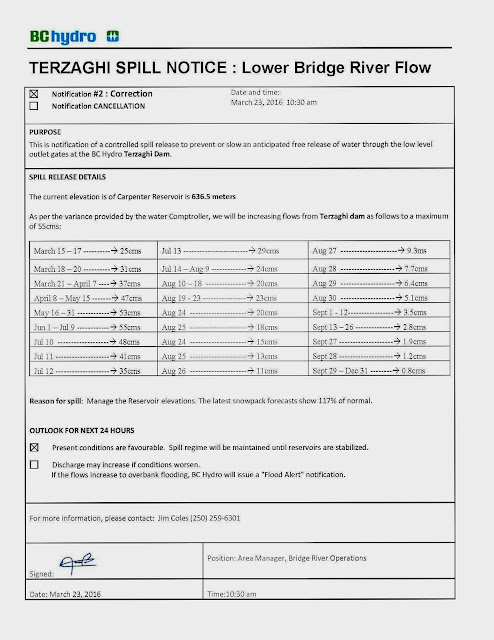 For additional information on the management planning process, please visit the BC Parks website at http://www.env.gov.bc.ca/bcparks/planning/  On this webpage, there is an RSS feed mechanism that allows users to sign up for messages regarding management planning stages.  A notice for the next stage of public input into the South Chilcotin Mountains Park will be sent out via the RSS feed mechanism upon release of the draft plan for public input.

HIGHLINE RD. TRAVELLERS, keep an eye on this
SLRD ENGAGED IN RESPONSE PLANNING FOR ELEVATED FLOOD RISK ON ANDERSON LAKE DUE TO SPRING FRESHET 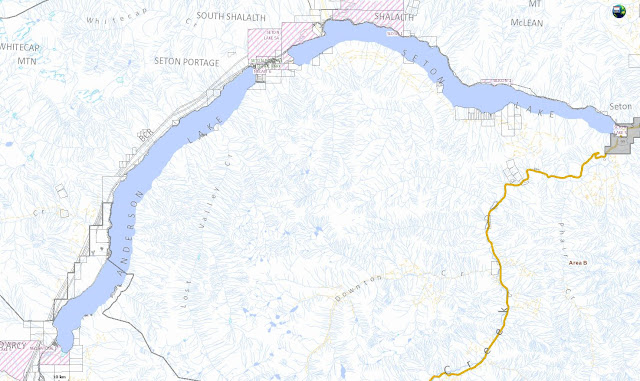 The MacGillivray Pass Trail was original constructed between 1885 and 1945 as a public highway and maintained by public expenditures.

Parts of the original road are passable now, with other parts grown over and otherwise obstructed. The original route is clearly visible.

I initiated a process aimed at addresings issues/conflicts and establishing a process/plan to revitalize this legally gazetted trail.  ,Along with the Electoral Areas  B and C we each are contributing $2,000 from our respective Select Funds (total $6,000) for initial staff time to provide support/research into the proposed plan to restore the McGillivray Pass Trail as well as potentially hire a contractor/facilitate a meeting and provide an outcomes report regarding same.

My report to the Board is here and has some good info re the trail::
https://slrd.civicweb.net/FileStorage/5ED866DE52A34DFEB2FDA996A1B2BA01-DRMcGillivray%20Pass%202016Optimized_DemareMack.pdf
Posted by Debbie Demare at 4:03 PM