The sharp eyes of Irene Calbick have spotted patches of Canada Thistle around Gun Lake.

Over 30 hours of volunteer time were contributed to pulling and chopping the Canada Thistle from 2 locations around Gun Lake:

While our volunteers have done this as a stop gap measure, ongoing noxious weed control needs to be done on these two patches next year.   There are other spots that have the Canada Thistle as well on Lakeview & W. Gun Lake Rd and we will continue to identify and address these patches as possible.  It needs to be noted that these patches are all on public road sides.

I have written both Min. of Transportation and Interior Roads asking what their plans are for ongoing action to control this invasive specie's spread around Gun Lake.

If you find this plant - chop it, pull it and bag it and take it to the transfer station.  If you would like more information on what you think might be an invasive email lrinvasives@gmail.com 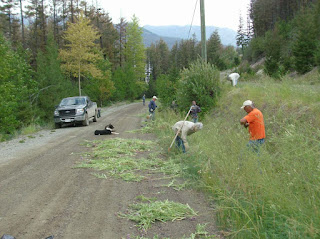 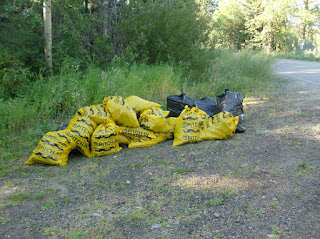 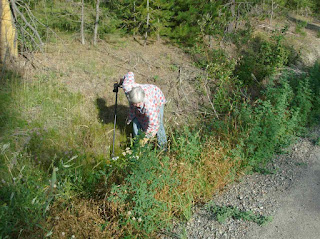 Thank you so much to the community volunteers for taking on this "prickly" job!

Here are two links to information on this invasive plant:
http://www.scribd.com/doc/103224397

Canada thistle (Cirsium arvense) is recognized as a noxious weed in BC and it can be a problem given the space to spread.  Canada thistle does show up throughout BC and is often associated with roadside, livestock grazing, logging clearings etc.. and can be spread in many ways including in hay.  Regionally we have Canada Thistle listed a species that is "A High Priority For Control".
There are a number of other thistles included several native species so correct identification should be made.  Canada thistle has relatively small flower heads and it has rhizomes and is a perennial (it spreads via underground runners to form patches as well as by seeds and lives for a number of years).  Cutting the plants is a good option as suggested in the email, though this will need to be repeated several times throughout the year as the plants will resprout.  Ideally plants should be cut before flowering and if they are in flower it is important not to spread the seeds and to bag the cut seed heads or cut material for proper disposal.

Posted by Debbie Demare at 1:23 PM