The Saddle Rd. (Lakeview Ave. over to transfer station) has been graded.  Thanks to Tony Maida (Gun Lake property owner) for bringing this my attention.  I had some communication with IRL as it had not been graded for two years.  For future reference this is a road whose classification (6) means it should have a scheduled grading yearly.

Last fall on Gun Lake we had 3 instances of dock poaching.  In these cases, the docks were disengaged or pulled from the beach, used and then beached elsewhere on Gun Lake.

At the end of August, we had a situation where a group of people were seen on one dock and the next day on the next door property's dock.  In this case, these folks were nude and were seen to be paddle boarding in front of other people's docks. 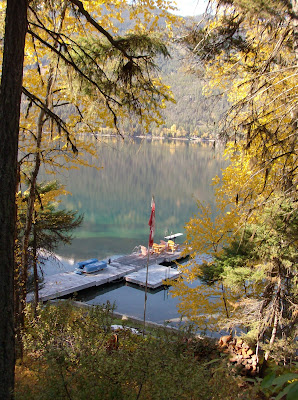 There are some steps you can take to make your dock less useable and your property less attractive to this sort of thing.  It appears most vulnerable times are summer and fall.
1. Take more intensive steps to secure your dock (if possible)
2. If your property is for sale, remove For Sale signs on lake.
3. Install a trail cam, these are not expensive and do an excellent job of taking pictures
4. Install motion sensor outdoor lights
5.  Leave light (lights) on a timer in cabin/house
6.  Talk to your nearest "full time" or "more time" neighbor and let him know when you are there and not there.

I am going to be talking to the RCMP re what advice they have on this.

This is the latest map for the Phase 2 Fuel Mitigation Project in the Gun Lake Area.  The hope is to get this completed late Fall 2016 or Spring 2017. 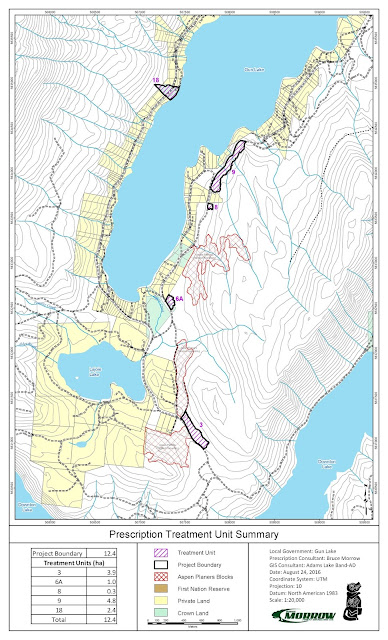 What is fuel mitigation?  See my previous blog post on this (scroll down) http://www.debbiedemare.com/2016/02/cue-happy-dance-bralorne-sewer-system.html

The public consultation on the Gun Lake Fire Services options concluded on Friday, September 9.  The staff will be compiling the input received and sharing it with the Electoral Area Directors this fall.  An online question/answer derived from the input will also be posted.   The engagement from the property owners on Gun Lake has been excellent both in quantity and quality of input.

Last week, the Gun Lake Fire Protection Society circulated to its members a proposal for an option they called:   Status Quo w/Enhancements.  Our Emergency Program Manager, Ryan Wainwright has provided the following information to in part address this proposal and to continue to educated/inform folks on requirements/etc for Fire Services in 2016.  I am sharing this as I personally found it useful in this form.

The key difference between Option 1, and the model put forward through the GLFPS, is that Option 1 requires GLFPS to evolve into a structural protection fire brigade, with status as a fire department under the Fire Services Act. This is the ONLY way that GLFPS would be legally able to enter onto private land at the sole direction of the Chief to fight a fire, and it is governed by provincial legislation – not SLRD bylaw.

The SLRD Fire Services Review noted that the GLFPS was under-funded by the current requisition, and that there were liability risks that could arise if operation continued in its current model. Essentially, the risks are these:
o   GLFPS is not permitted to enter onto private land to fight a fire, unless under the direct authorization of a BC Wildfire Service representative, using the powers of the Wildfire Act.

o   If GLFPS were to enter onto private land to fight a fire WITHOUT the direct authorization of the BC Wildfire Service, the liability insurance held by the GLFPS becomes void. By entering onto private land without authorization of the BC Wildfire Service, GLFPS would have broken the law, and insurance companies will not cover illegal activities.

o   It has been suggested the GLFPS could enter onto private land with the written consent of the landowner, which may afford some liability protection to GFLPS if the landowner were injured or their property damaged. However, if a GLFPS member were injured or killed fighting that fire, WCB benefits would be void, as there activity they were participating in is still not considered within the authority of a wildfire protection society.

o   In the case above, if the injured party/deceased person’s family decided to sue, and given that GLFPS does not have the authority to enter onto private land, GLFPS liability insurance would likely be void. This means that the officers of the Society could be held personally responsible for the costs of the law suit, and any eventual award to the injured party. That injured party could additionally name the SLRD in a lawsuit related to the actions of the GLFPS.

o   There are other wildfire protection groups within the regional district, but they are not incorporated as societies. They are “neighbours helping neighbours”, and everyone assumes their own risks based on the activities they decide to undertake as individuals. These groups do receive funding from the SLRD, but by applying for grants in aid through their elected officials. Groups receiving such grants sign an agreement with the SLRD that they will only undertake wildfire protection activities, and do so at their own risk.

o   The only way that GLFPS is sustainable as a wildfire protection society, in light of the risks highlighted above, is to ONLY act with the authorization of the BC Wildfire Service, or to dissolve the Society and continue as “neighbours helping neighbours”.

The corollary of the above is that in order to achieve the current goals of the GLFPS, the service will need to evolve into a fire brigade, and receive authority as a fire department under the Fire Services Act.

o   As discussed at the meeting, any option referring to a Combined Area A fire department would necessarily require satellite halls to provide the needed coverage for all those paying into the service. The current GLFPS building, and the Bralorne VFD site are obvious possibilities, with a main hall in Goldbridge. If this information was missed in the presentation, my apologies – however, I did discuss this with several of your members before the GLFPS meeting was held.

o   In order to have FUS recognition, a VFD requires a minimum of 15 members who regularly attend training, and a reasonable expectation that a similar number would be available to respond to a fire. No VFD can guarantee the availability of a full crew at any given time.


Q. Why does the Provincial Gov’t wish to prevent  our local Society from acting in a First Responder role to prevent the spread of a fire from a building to the forest interface and subsequently to other properties before the BC Forest Fire Service is able to get to the scene?

Isn’t this really counterproductive to the interests of the public in general and to our community in particular?

Does the Provincial Gov’t have a really good answer to this question?

A. “The BC Office of the Fire Commissioner is available to answer questions from the public related to the Fire Services Act, and the proposed Fire Safety Act.”

Q. Is the SLRD supportive of this BC Gov’t policy?

A. “The SLRD supports communities acting to assist one another during emergencies such as wildfire, but discourages individuals or groups from reacting in a way that endangers themselves, or puts other responders or community members at risk.”

“The GLFPS may still (and has always been able to) act to protect the Gun Lake community from the spread of wildfire. However, it is advisable to do so in close coordination and at the direction of the BC Wildfire Service, and to ensure that liability protections in place for Society members are preserved. This can facilitated through cultivating a relationship with the Lillooet Fire Zone (as AL Leighton has been doing this year) so that the Fire Zone understands the equipment and capabilities of the GLFPS, and can provide direction while enroute with reinforcements.”
Posted by Debbie Demare at 8:40 AM